It’s the festive season and there’s a new neighbour in town. Danny DeVito plays the part of Buddy Hall, a cunning family man desperately in need of settling down. It’s not easy establishing a home in a new neighbourhood as the Hall family soon finds out, especially with a neighbour like Steve Finch, played by Mathew Broderick.

Finch is a man set in his ways. His desire to control everything around him borders on obsessive-compulsive. At best he is anally retentive; at worst seriously unstable. As the self proclaimed chairman of the Town’s Christmas celebrations, Finch feels completely threatened by the arrival of Hall.

Their families get along like a house on fire, but these two alpha males can’t see eye to eye on anything. They become fiercely competitive and unwittingly puerile, as each tries to outdo the other. Buddy Hall gets a bizarre notion into his head about adorning his house with sufficient lighting so that it can be viewed from space. He is prepared to do this even if it means arousing the wrath of the Finch family.

This is a weird and wacky tale about Christmas cheer and reconciliation. Naturally there is that inevitable chemistry between DeVito and Broderick. From rivalry to cooperation, this is their story told in the true spirit of the festive season.

2nd Title: Jingle All The Way

A father vows to get his son a Turbo Man action figure for Christmas. However, every store is sold out of them, and he must travel all over town and compete with everybody else in order to find one.

A young girl’s aunt tells her the tale of a young ice skater and an enchanted reindeer. 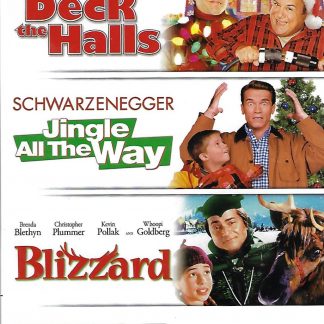 You're viewing: Deck The Halls/Jingle All The Way/Blizzard $19.95 Inc. GST
Add to cart
0