Benji is upset that he is playing the second shepherd in his school Christmas play for the second year in a row. But when Benji falls asleep while practicing his lines, his dream carries him and his dog Waldo to Bethlehem 2,000 years ago!

2nd Title: The City That Forgot About Christmas

A young boy’s grandfather tells him the story of a city that forgot about Christmas until a carpenter named Matthew comes to town and teaches the children about Christmas, much to the chagrin of the Mayor and his cronies.

The Emmy Award winning Christmas story within a story…

A family experiences the excitement and anticipation of the holidays, while trying to keep the true meaning of Christmas at the center of their preparations.

The young daughter’s disappointment over a gift she did not receive melts away with the fantasy of the first Christmas… as David, the stableboy, presents his beloved pet lamb to the new-born baby Jesus and his bed to Mary in Bethlehem. 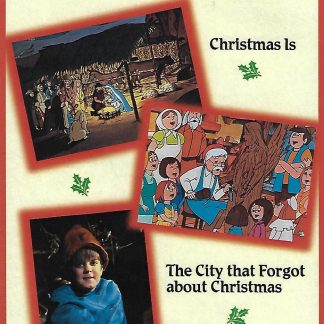