Kermit the Frog, Miss Piggy, Fozzie and the entire cast of the Muppet universe come together to re-tell Charles Dicken’s immortal classic “A Christmas Carol” This was the first time the Muppets appeared on screen since Jim Henson’s death in 1990. Michael Caine gives a magnificent performance as Ebenezer Scrooge in a world full of muppet comedy and almost scary performances from the “Ghosts of Christmas past, present, and yet to come”.

This single disc titled “The Muppet Christmas Carol: Kermit’s 50th Anniversary Edition” was released in 2005 to recognize Kermit’s 50th anniversary. This new, unopened DVD holds both the theatrical edit of the film and the “home-video edit” (or “extended cut”) of the film. The widescreen version is of the theatrical cut (not seen since the film was in theaters); and the Full Screen presentation of the film is of the extended cut that includes the song “When Love Is Gone.” Distributed by Walt Disney Home Entertainment. 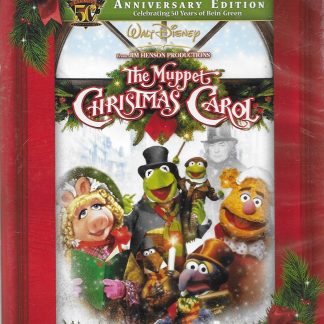